‘Hoops For Hope’ — A fun family festival with a cause 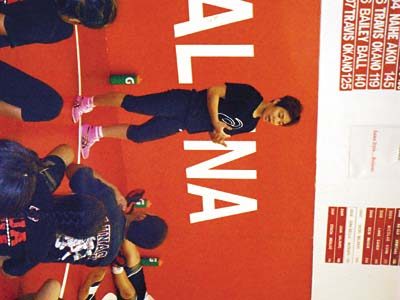 Clarissa Chun, Hawaii’s only wrestling Olympian, recently led a two-hour clinic for Lahainaluna High School wrestlers. A member of the 2008 Olympic wrestling team in Beijing, Chun won a world title in 2008 and is a former Pan Am gold medalist. The Roosevelt High School graduate from Honolulu is currently the top-ranked American at 48 kilograms (105 pounds). She hopes to compete in the 2012 London games. Chun currently resides in Colorado Springs, Colorado, as an athlete-in-residence at the Olympic Training Center. She will soon compete in an international competition in Mongolia.

“It will be a day totally packed with family fun,” said spokesman Ben Prangnell.

The highlight will be a free performance by Joseph Odhiambo, annual performer at the NBA All-Star Game, Guinness world record holder and past performer with the Harlem Globetrotters.

“You have to see him to believe his incredible talent,” said Prangnell.

The festival is a celebration with a cause. Proceeds support the Kit Lauer Memorial Scholarship fund.

KAHULUI — An anonymous donor is providing more than $1 million in funding to the Na Ala Hele Trails and Access ...

“God made poles and men made rods” is an old saying that goes back a long way, but it is still true today. ...