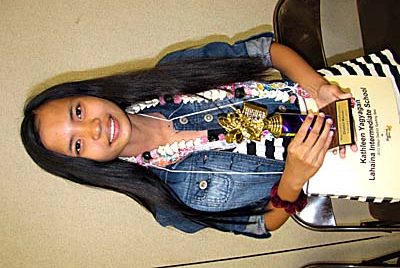 She will travel to Oahu later this month to compete with 13 other district winners on March 24 for the state crown and a chance to vie for the United States title at the 2012 Scripps National Spelling Bee held near Washington, D.C., on May 29-31.

“Kathleen Joy competed with 30 other students and emerged as the winner of the Maui District Bee after correctly spelling the word ‘adios,'” Char added.

Her English teacher is Peggy Toelken.

The competition is open to all youth in grades four to eight.

“This is my second year,” Yagyagan commented. “Last year, I think I won sixth place or something.”

“When I was studying in the Philippines, they had contests there, and I liked participating,” the 14-year-old said. Char is a spelling bee advocate.

“Participating in the Spelling Bee allows students to be a part of a great educational opportunity. It also teaches them the importance of studying hard and achieving goals in life.”

“It takes a lot of commitment and dedication from a student who is participating in any Spelling Bee competition, whether it’s at the school, district or state level,” Char continued.

“This process also teaches them discipline and inspires them to strive for academic excellence. The characteristics that they develop help them to become better adults in the future. The skills that they learn will help them in their future careers and jobs. Our next state champion speller could grow up to become Hawaii’s future governor or the United States President. You never know!”

Char is the special projects administrator for the aio Foundation, event organizer.

This is the second year that the competition has been coordinated by the nonprofit with support from its community partners.

The mission of the aio Foundation is to provide programs that build health, education and welfare amongst Hawaii’s children and to provide inspiration for adults and children to become responsible for themselves.

The live broadcast of the state spelling competition will air on PBS Hawaii/KHET (statewide) at 7 p.m. on March 24 with a radio simulcast on ESPN 1500 AM.