Erickson to be honored by National Academy Foundation 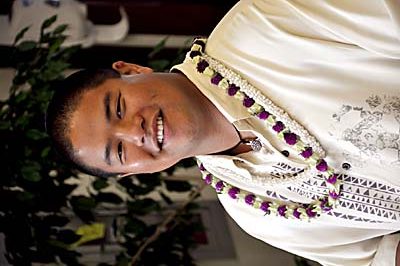 LAHAINA — Lahaina-born Matthew Erickson has been named a 2011 Alumni Honoree by the National Academy Foundation (NAF) based on his career success following graduation from the Academy of Hospitality & Tourism program on Maui.

Erickson is one of five alumni selected from four academies throughout the United States who will be honored at NAF’s annual awards banquet on July 18 in San Francisco, California.

The Academy of Hospitality & Tourism (AOHT) program is one of four career-themed academies operating under the NAF curriculum. Others academies include finance, information technology and engineering.

The academies prepare students for post-secondary education and careers through a theme-based, contextualized curriculum approach.

Implemented in more than 110 high schools nationwide, AOHT provides public high school students with the requisite knowledge and skills for a successful career.

Operating as a small learning community within the school, AOHT’s curriculum provides an in-depth look at all aspects of tourism and hospitality, including coursework in business, geography, hospitality and economics.

The first academy in Hawaii began in the early 1990s at Lahainaluna High School, funded by a one-time donation from Kaanapali Beach Hotel.

Due to its success, Maui High School and Baldwin also joined the program in 1994 and ’95, respectively. Currently, there are 200 students enrolled in the AOHT program on Maui.

The Maui Hotel & Lodging Association provides scholarship funding and administrative and program support for the Academy of Hospitality & Tourism.

The son of James and Evelyn Erickson of Napili is a 1996 graduate of Lahainaluna High School’s AOHT.

He credits the program for instilling in him the concept of kuleana (responsibility), which he considers the basis for his success.

“A right is a responsibility, and an obligation is a privilege. It has been my privilege to have been a part of the Academy of Hospitality & Tourism… the kuleana that came with my involvement has taken me to where I am today,” Matthew said.

AOHT also instilled a passion for education in Matthew. Originally, he intended to join the workforce immediately after high school.

However, upon graduation, Matthew understood that post-secondary education would be critical to his success in the industry.

He received his Associate of Arts in Business Degree in 2007 from the Western International University in Phoenix, Arizona.

Through the academy, Matthew was afforded many opportunities to give back to the community.

In 2009, through his participation with the Lahaina Hawaiian Civic Club, he incorporated elements of his Hawaiian host culture and introduced a resolution to the Hawaii Legislature emphasizing the importance of Hawaiian culture awareness to tourism in Hawaii. The resolution passed with flying colors.

To this day, Matthew continues his kuleana to contribute to the community. He currently serves on many boards, including the Friends of Moku’ula and Lahainaluna High School Foundation.

Matthew has also served on the Maui AOHT board of directors for many years, speaks regularly to Hawaii high school AOHT students and contributes to the AOHT student conference and career fair each year.

His motivational and inspirational speeches provide students with guidance to start thinking about higher education and a future career within the visitor industry.

As a leader at Old Lahaina Luau, Matthew has been a driving force in the company’s many community initiatives, including school supply drives for Lahainaluna High School, fundraisers for non-profits and cultural improvement work in reserve sites, such as taro patch restoration, native plantings and eradication of invasive species.

Old Lahaina Luau is a six-time recipient of the Hawaii Visitors & Convention Bureau’s “Keep it Hawaii” Award. The company has also garnered numerous ‘Aipono Awards and other honors for its community initiatives.

Carol Reimann, co-chair of the Academy of Hospitality & Tourism and executive director for the Maui Hotel & Lodging Association, nominated Matthew.

She said, “Matthew’s involvement with the Maui AOHT has allowed him to grow and flourish into the strong, independent, philanthropic and dedicated leader who has made a difference in Hawaii. He has elevated the AOHT experience to a whole new level, incorporating skills learned through the academy into his daily work routine, and he still finds time to give back to his community and Lahainaluna High School, his alma mater.

“It has been a pleasure watching him grow and achieve. We expect nothing but more great things from Matt in the future,” she concluded.

LAHAINA — Lahaina Restoration Foundation (LRF) is reaching out to the community for input during the process to ...