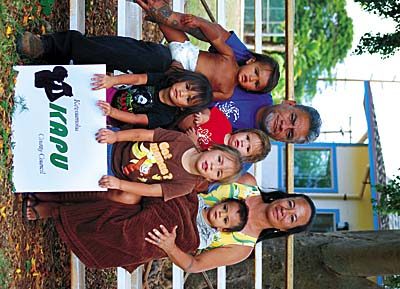 Jonah Ke‘eaumoku Kapu and his wife, Uilani, pose with their grandchildren.

LAHAINA — Jonah Ke‘eaumoku Kapu is a man of passion, willing to stand by his convictions and walk the talk to make a difference.

The 47-year-old Native Hawaiian has joined the race for the West Maui County Council seat, citing the protection and perpetuation of traditional Hawaiian management principles as the reason.

“It’s time to strengthen the foundation of our island,” he said.

Living in the uplands of Kauaula with his family overlooking the community he has been serving the past ten years, Kapu is a taro farmer.

He was born and raised on Oahu.

“In 1997, I came home. My dad was born and raised here. My dad had to leave in 1947. Like now, times were hard back then. You had to find other employment in other places. The first place my dad went was the military,” he recalled.

It wasn’t “until we got older and my father said that we had a responsibility to Lahaina and Kauaula Valley. Over time, I came to a point in my adulthood, and I had to basically fulfill that obligation to the responsibilities my father had. He was a taro farmer. His grandfather, his father before him was a taro farmer, so I guess you can say I’m perpetuating the legacy of taro farmers in my family,” he said.

“Right now, I have a total of 14 taro patches. I have nine wetland taro patches, and the rest is all dryland. I have 40 different varieties of taro. I have 27 varieties of sweet potato. I have seven varieties of banana. My son raises pigs. Gee, we got chickens up the ying-yang, and I guess we found the sense in ourselves to live the traditions all over again,” Kapu added.

As a parent of three sons, a daughter and six grandchildren, Kapu takes his responsibilities seriously.

“I think that we, as parents, as grandparents, should take a more responsible role and be fully committed and involved in trying to make a change,” Kapu explained.

As a community volunteer, Kapu has plenty of experience.

He served on the Maui County Cultural Resources Commission for five years. He is currently serving his second five-year term on the Maui, Lanai Island Burial Council.

“I am the chair for the Native Hawaiian Historic Preservation Council, an advisory group for the Office of Hawaiian Affairs,” Kapu added.

“I even jumped in with the West Pacific Fisheries Management Council for a year,” he said

His initial involvement was ignited by the development of agricultural subdivisions south of Lahaina. A group of West Side farmers and landowners formed an LLC in 2002 and petitioned the State Land Use Commission to determine if ag subdivisions qualified as permitted uses on agriculture land.

“First of all, me and my wife (Uilani) founded Kuleana Ku‘ikahi LLC. That one is still going on. We still have some things on the docket with the State Land Use Commission. That was sort of the catalyst of me getting involved in all these other things,” he noted.

He worked with State Rep. Mele Carroll (D-13th District) and Sen. Kalani English (D-Sixth District) in the drafting of the ‘Aha Moku Bill to establish councils to create an integrated system of natural resource management.

“It was Act 212, and that is still pending,” the candidate commented.

Kapu stressed the importance of the council concept: “The thing about the ‘Aha Moku Council is… to at least have the policy-makers look at how important these traditional managements of land and ocean are, and how we can sustain ourselves for tomorrow.”

Kapu is a leader in the Native Hawaiian community, a Hawaiian protocol specialist, a cultural practitioner, teacher and mentor.

When he moved here in the late 1990s, he expanded the Na Koa Kau I Ka Meheu O Na Kupuna Oahu group (The warriors that walk in the footsteps of our ancestors) to the West Side of Maui.

“We are a part of an organization call Na Papa Kanaka o Pu‘ukohola.

“I’m known as Kaukau Ali‘i. I’m one chief out of five that sit as an advisory chief to the Pu‘ukohola Heiau” on the Big Island.

“So, that’s really the major focal point as to why the group was formed.”

The Na Koa group led by Kapu participates in many cultural festivities, ceremonies, events and activities, like Celebration of the Arts, International Festival of Canoes, Aloha Week Festival, annual Makahiki ceremonies and the restoration of Koieie fishpond in Kihei.

In 2009, Kapu coordinated a 193-mile torch march around Maui to raise attention for Native Hawaiian issues.

He is focused on maintaining the Hawaiian core values.

“I think we have to re-instill strengths within our commonality as humans. I think we need to reinforce hope within our communities, so they can know that when they go to the voting booths, that they can trust somebody,” he explained.

His campaign slogan supports his steadfastness: “He aina ali‘i, He kauwa ke kanaka” (The land is chief, we are its servant).